Thinking out loud on paper AKA designing Inspiration from Math, Magic, and History 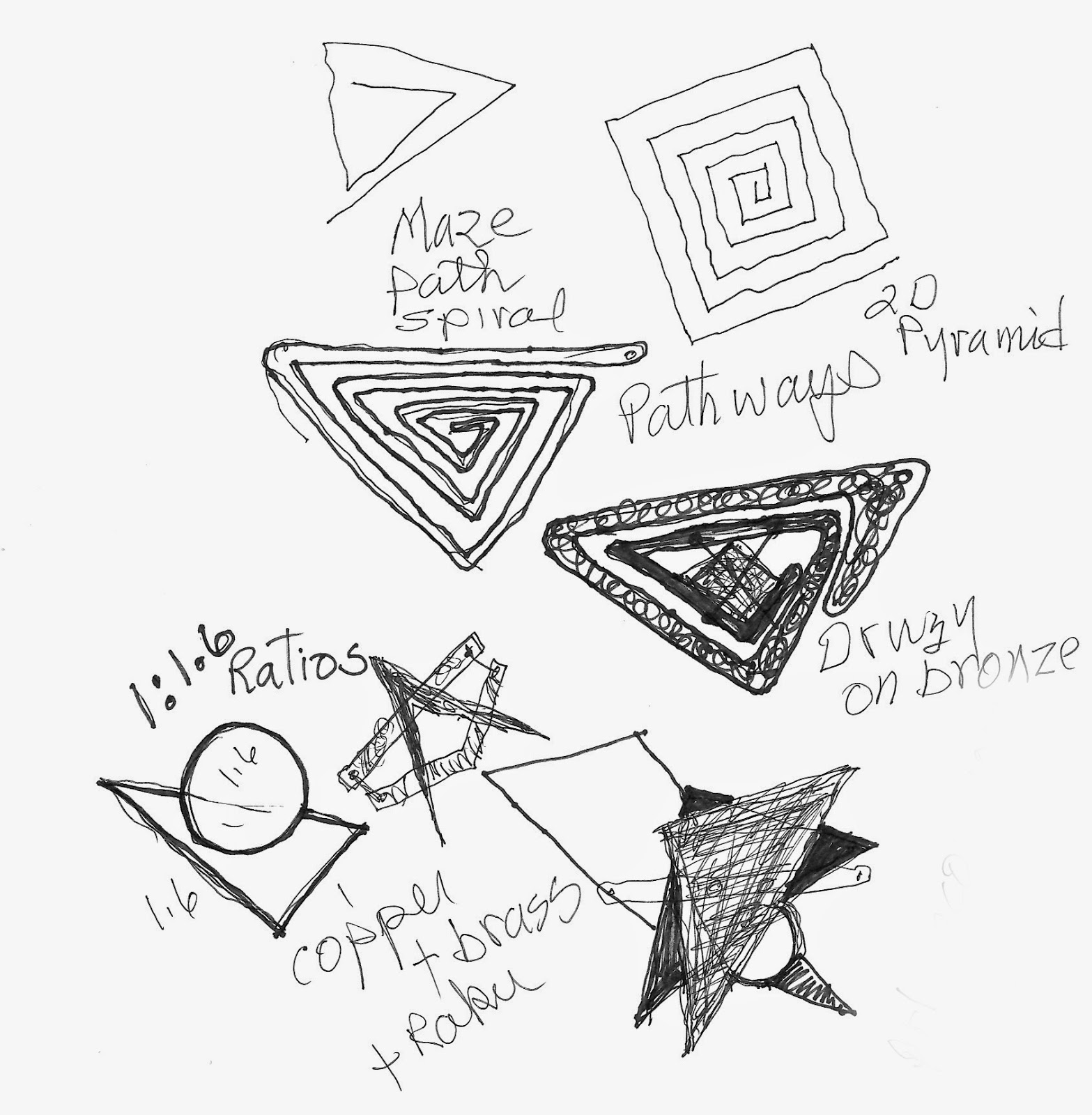 A page from my scratchings.  Sometimes different disciplines come together to aid my jewelry making. Remember math class? Ratios? Comparing one thing to another? I use that in jewelry often to create classically dimensioned pieces.  Lower left is a simple design for a pin based on the "Golden Mean"

This article is about the number.

Line segments in the golden ratio .
In mathematics, two quantities are in the golden ratio if their ratio is the same as the ratio of their sum to the larger of the two quantities. The figure on the right illustrates the geometric relationship. Expressed algebraically, for quantities a and b with a > b > 0,

where the Greek letter phi (

) represents the golden ratio. Its value is:

The golden ratio also is called the golden mean or golden section (Latin: sectio aurea).[1][2][3] Other names include extreme and mean ratio,[4] medial section, divine proportion, divine section (Latin: sectio divina), golden proportion, golden cut,[5] and golden number.[6][7][8]
Some twentieth-century artists and architects, including Le Corbusier and Dalí, have proportioned their works to approximate the golden ratio—especially in the form of the golden rectangle, in which the ratio of the longer side to the shorter is the golden ratio—believing this proportion to be aesthetically pleasing.
Mathematicians since Euclid have studied the properties of the golden ratio, including its appearance in the dimensions of a regular pentagon and in a golden rectangle, which may be cut into a square and a smaller rectangle with the same aspect ratio. The golden ratio has also been used to analyze the proportions of natural objects

So after all that its just a way to find pleasing shapes with a number....some would say a magical number. And that leads us to another discipline of spiritual journeys, in 2 dimension reduced to a sacred pathway or sometimes a spiral. In the upper right are sketches of possible magical pathways or mazes reduced to a pattern in clay or metal.

That brings me to the square top right which is like the path around and up to the top of a pyramid, the path of the soul in Egyptian philosophy. And so enters the third discipline. Archeology and history. Look to all these to find inspiration for art jewelry.

And right center is the beginnings of a real piece conceived in doodles on the back of a discarded printout of a map.

I often hear voices online crying "I just don't know where to get an idea, where to start" Look away from what others are doing, pickup a magazine or look online at something you have never looked at before. Put jewelry, design and art in the intent part of your brain and look. Learn to see patterns and forms in new places. Inspiration will come. Be of an open mind so you can recognize it when you perceive it.
Most of all be creative and have fun with beautiful ideas and materials.
Posted by Harry's Handmade Jewelry Ideas at 9:14 AM 3 comments: