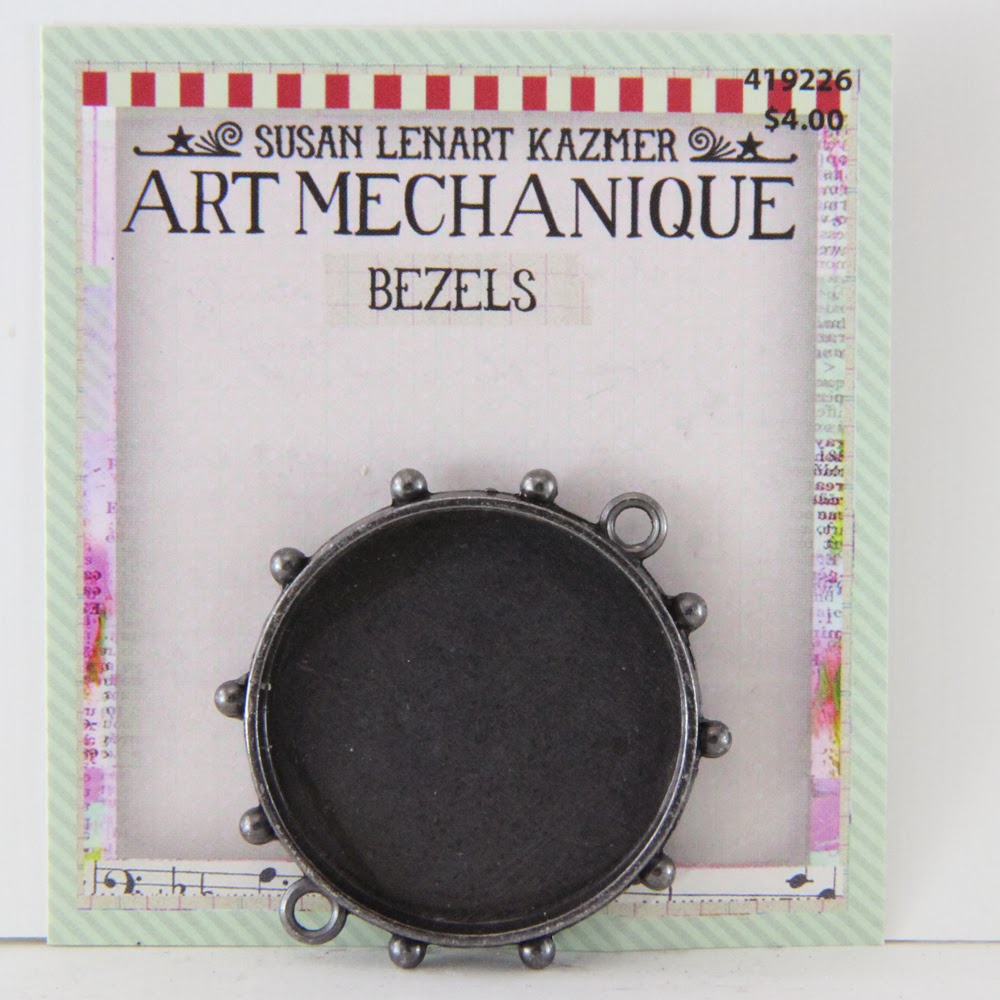 Most suppliers have this type of decorative bezel available to fill with your treasures. You can fill with many things like color and texture and of course 3-d objects. Used plain like this they are a good base. 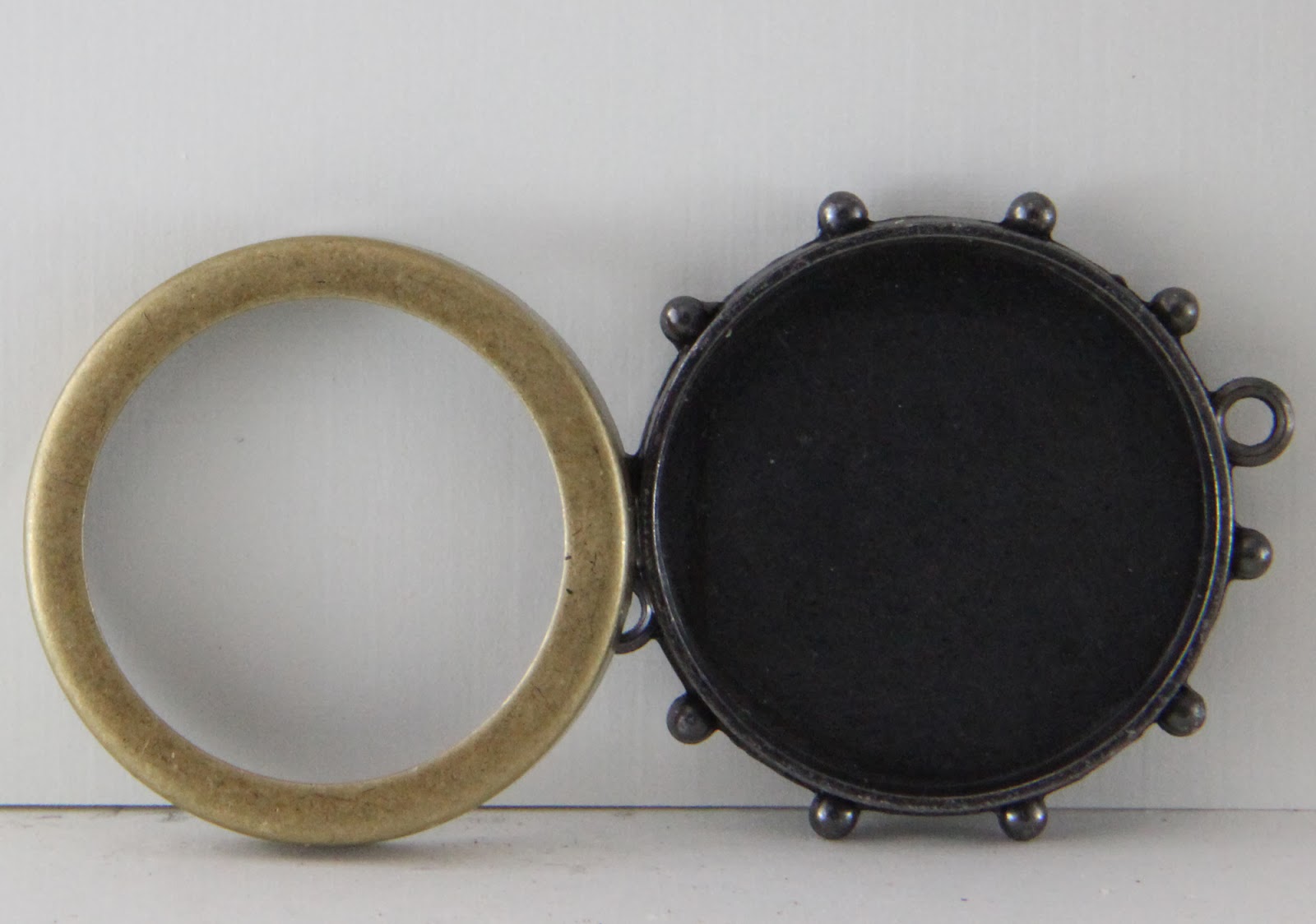 I noticed this open back bezel in my stash and it is a close, though slightly loose fit over the bezel. 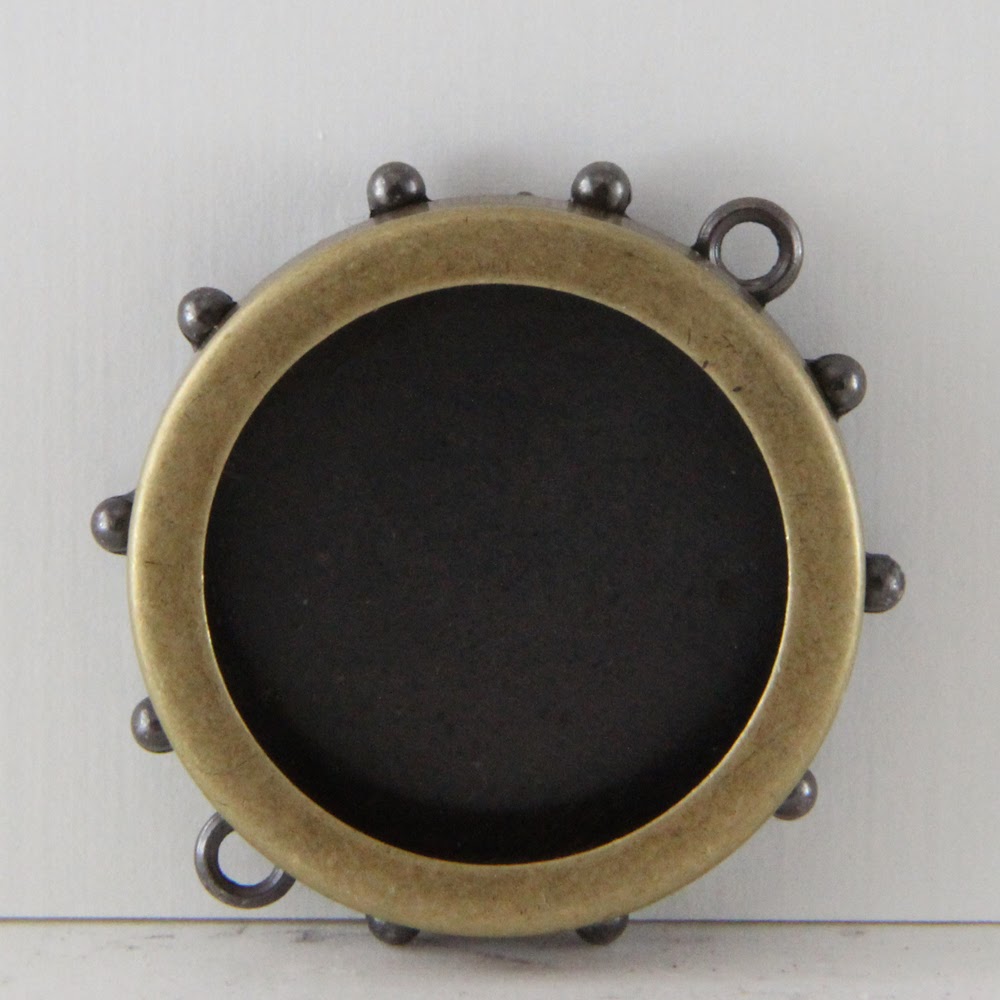 This seems to me to add a porthole look to the piece. Like a decorative frame. 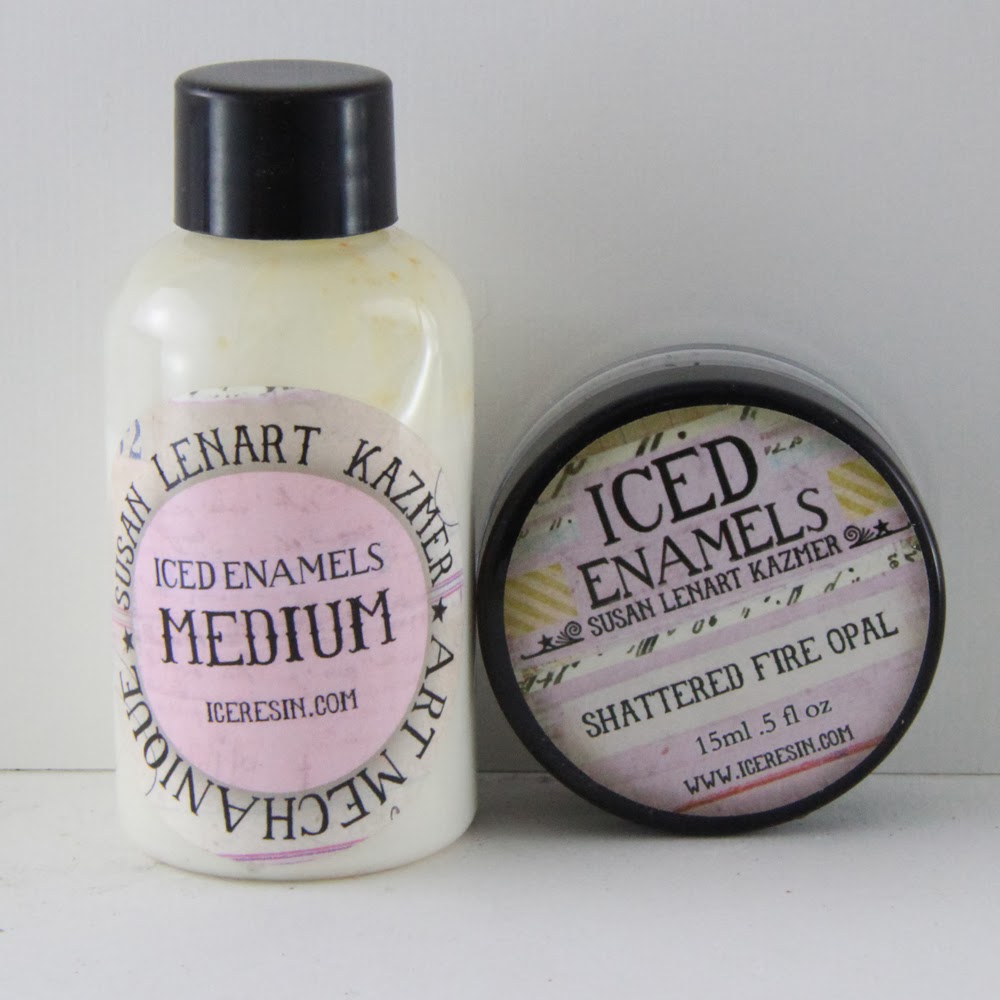 Of the many products we can use under Ice Resin this Shattered Fire Opal is one I adore. The color is like a fine broad flash opal when sealed in resin. I applied some of the medium and filled the bezel. Then allowed it to dry while I was warming the Ice resin to slightly above room temperature about 85 degrees. I mixed the resin in the prescribed manner and set it to rest for 10 minutes on a warm spot. This rest allows all the bubbles to dissipate. 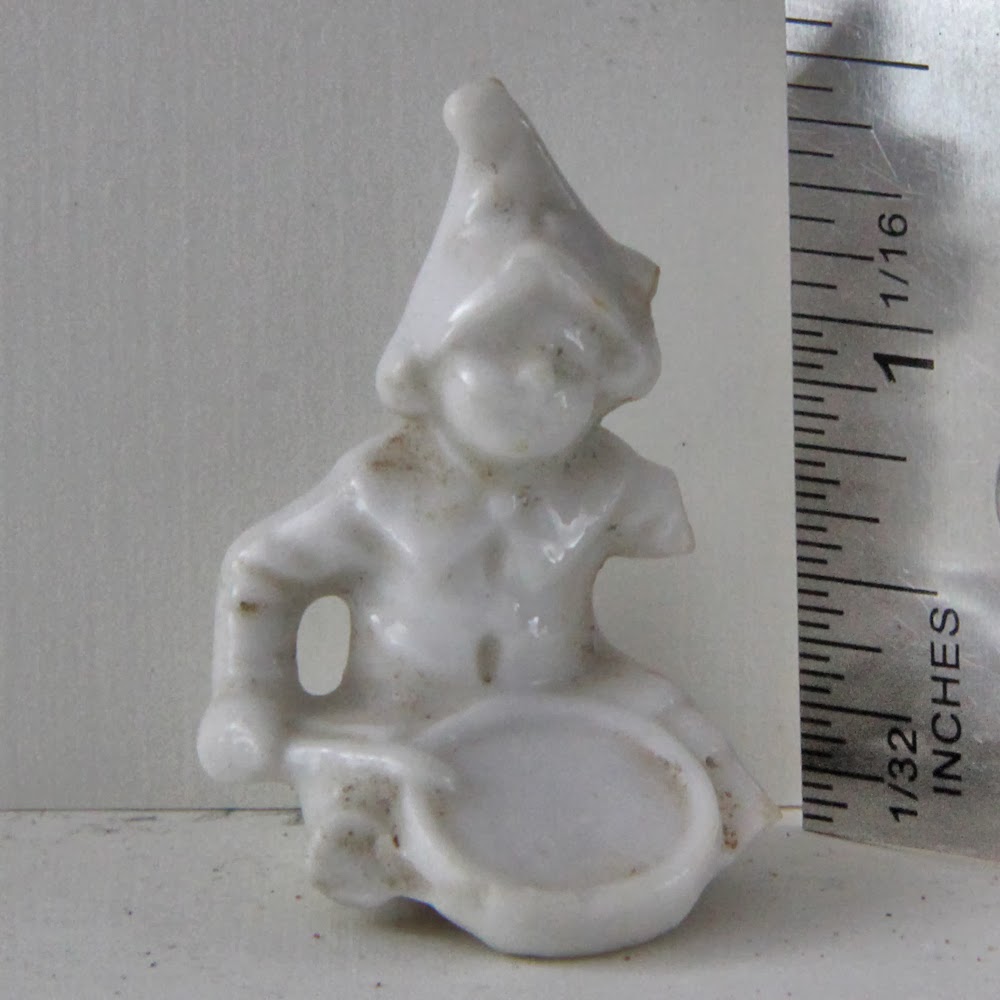 Next I looked for a subject to put inside on top of the resin. This fellow was a possible fit. 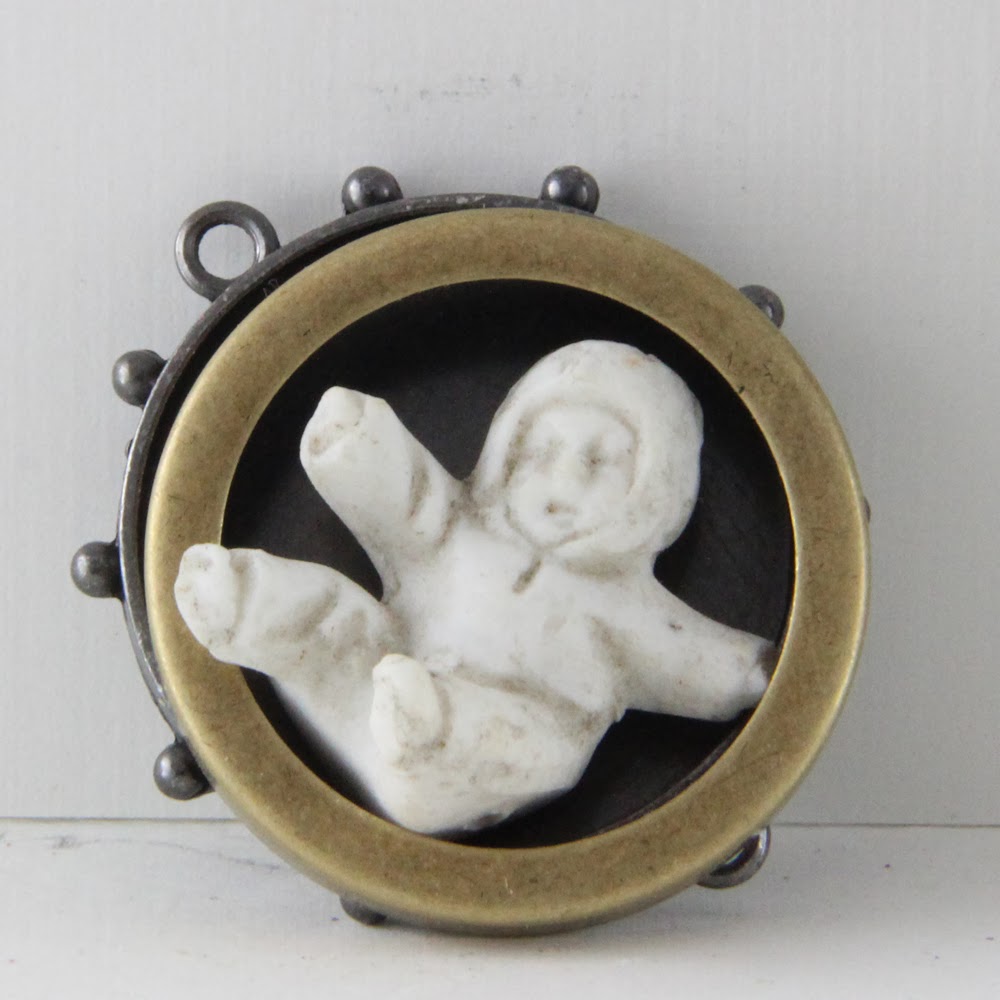 As is this tumbling baby. Both of these and hundreds more are available through my Etsy shop.
https://www.etsy.com/shop/oscarcrow 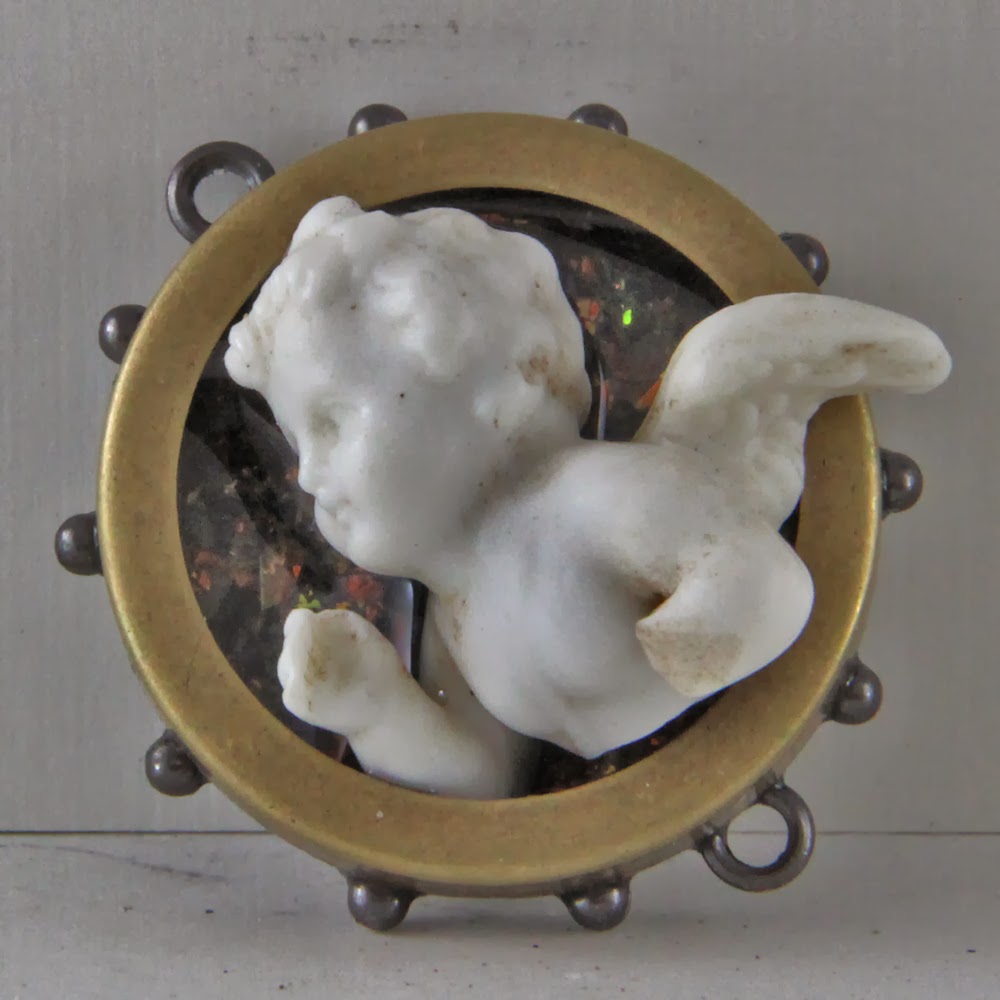 I chose this cherub or angel. The brass bezel was glued down to the decorative one with E-6000 and allowed to cure for five minutes. When that was secure I poured the resin and  filled the bezel to secure the cherub and cover the opal glitter in the back. I put this in a covered plastic food box and set it in a warm place on a cable TV box to cure. Two days later I trimmed some small leakage and now it is ready to add the finishing touches, a necklace and a pearl drop or a crystal.

To me this is a bit like making a high rise cameo. It is easy and by selecting a single focal point we have a strong design.

Posted by Harry's Handmade Jewelry Ideas at 9:36 AM 1 comment: 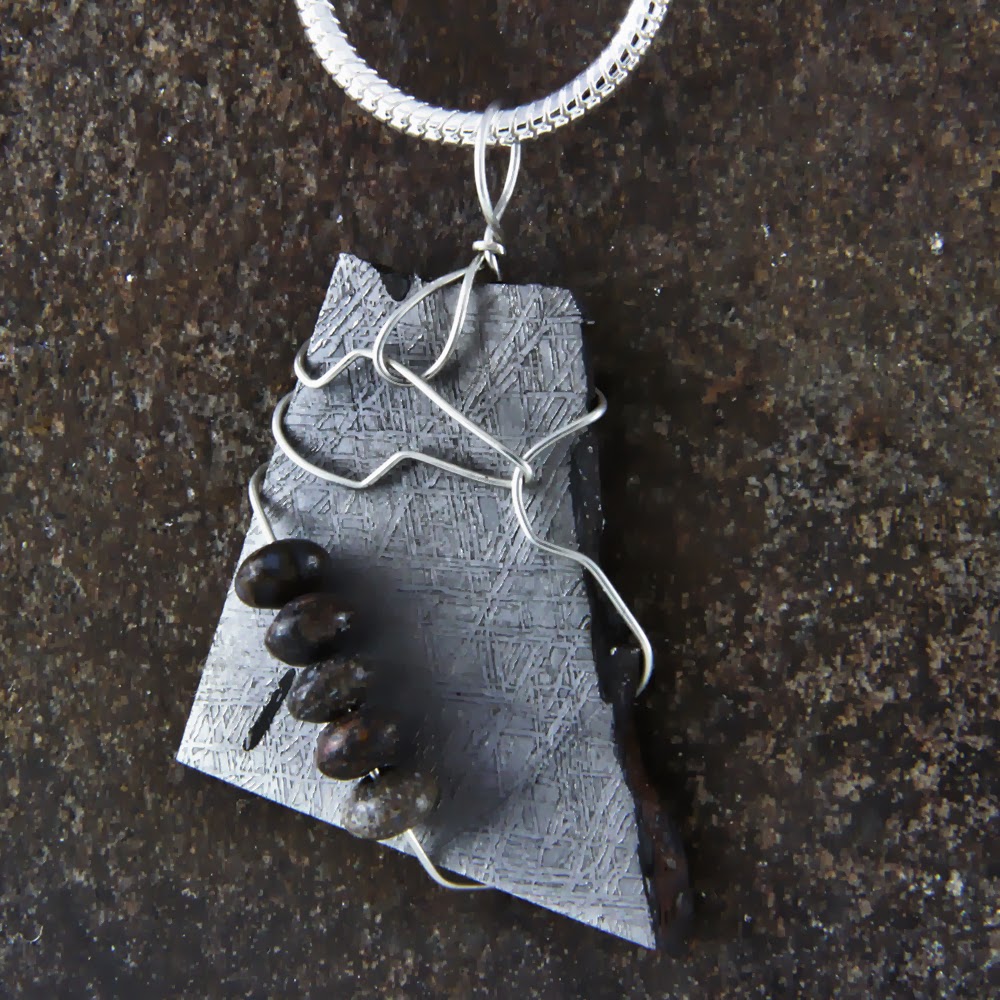 Here is the completed piece. I had to add a few extra wires to secure the stone.
https://www.etsy.com/listing/178286877/meteorite-and-dinosaur-bone-beaded-wire
It is for sale in my ETSY shop.
Posted by Harry's Handmade Jewelry Ideas at 5:25 PM 1 comment: 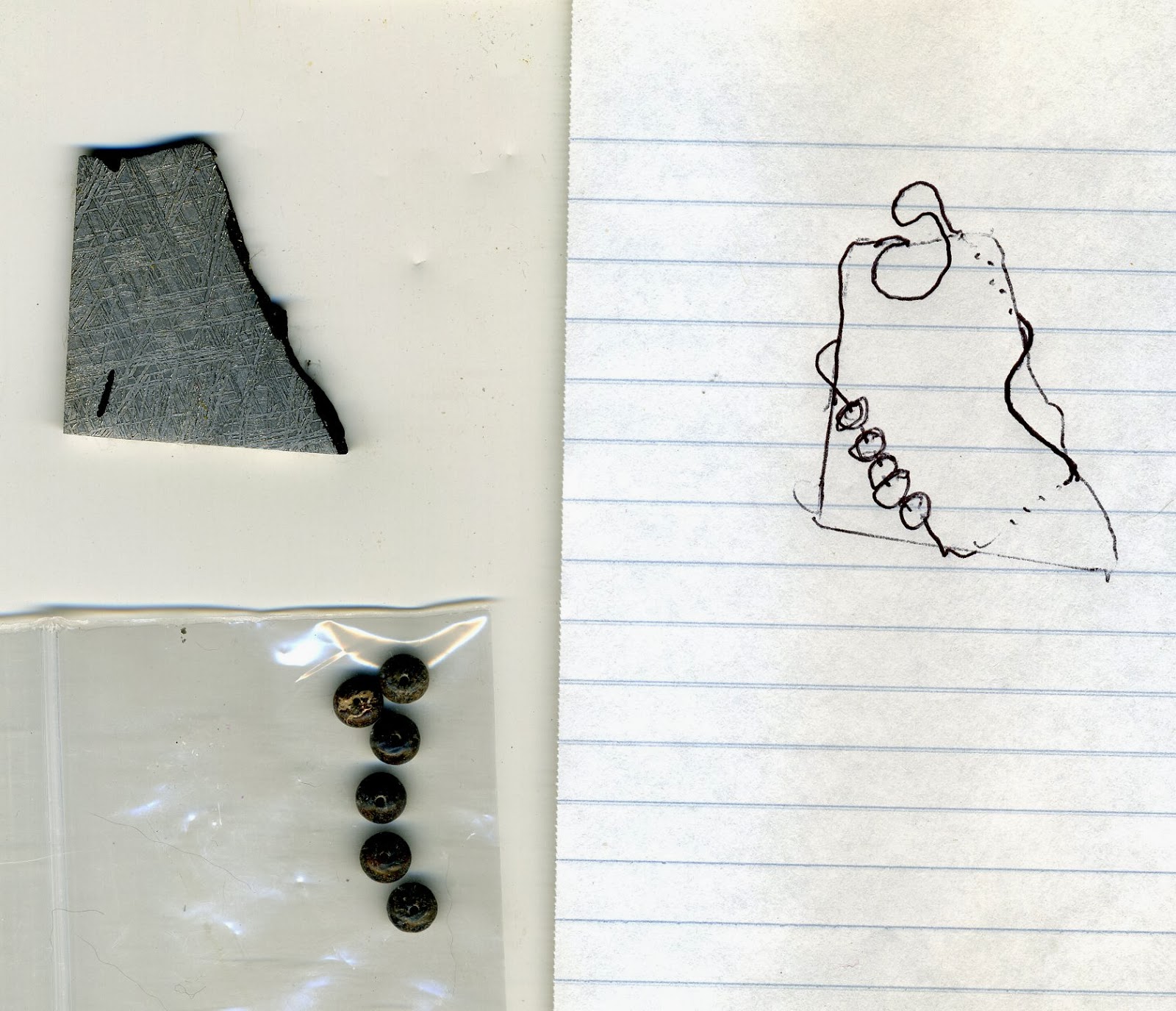 Jewelry can take many forms. Almost any materials can be used.  We give labels to jewelry based on materials and techniques. Often very biased judgements are made about those materials and styles based on purely arbitrary standards. Think of fine jewelry, costume jewelry, art jewelry, or assemblage as examples. Present day artists often use what ever catches their attention or sparks the imagination. In art (my background is fine arts) we call using found objects or ready made pieces "modern art". In jewelry we often see people using the same exact components from one or more sources to create new combinations that echo or mimic a style from the past.

I am returning to a foundation form this time with the use of rare, unusual materials. Historically this was how jewelry developed from the use of the more exciting, less common, or hard to find materials. The picture above has on the left a piece of an iron meteorite from the prehistoric Gibeon fall. This was one time an asteroid hit the earth in prehistoric times and was so large it persists today. The main mass is listed as 26 tons. Following is a blurb from Wikipedia.
Name: Gibeon
This is an OFFICIAL meteorite name.
Abbreviation: There is no official abbreviation for this meteorite.
Observed fall: No
Year found: 1836
Country: Namibia
Mass:

26 t
My little slice is from an exported fragment from the fall. It shows the internal structures of the crystal matrix of meteoric iron. This pattern is called the Widmanstatten pattern. Below that are beads made from fossilized dinosaur bone.

I traced the slice of iron and using a pen drew a possible form for wire wrapping to include the bits of dinosaur bone in what I hope will be a pleasing combination.

In olden times this would have been called a talisman. Something to evoke the power of the animal or the sight of a shooting star that brought the metal to earth. Now I call it ornament, jewelry or personal decoration. I embodies both the animal and what some think is the end of all of the dinosaurs.
Later I will post the finished piece.
Posted by Harry's Handmade Jewelry Ideas at 2:33 PM 2 comments: