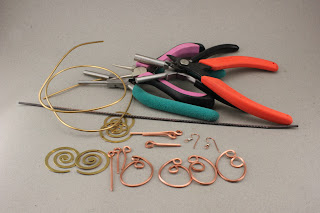 I love working wire to create simple rustic earrings. The only secret is to make sure the design hangs straight. To start I took a 24 inch piece of 14 gauge square soft copper wire and a small round bottle. The wire was wrapped around the bottle until I had 6-8 loops.Using flush cutters I separated the loops squaring the ends. Using looping pliers put a loop on each end of the large ring. A smaller loop on the top and a larger loop in the center. Then  I pushed the wire until the loops were above one another.Next I cut 6 straight wires 2 longer..and 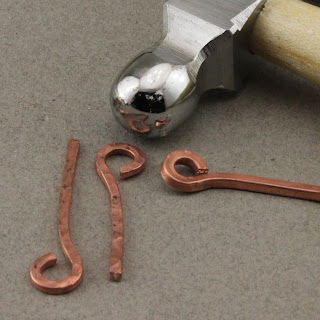 formed loops on one end. Next in order to harden and decorate the wire a planishing hammer with a polished ball peen was used to texture and flatten the wire. 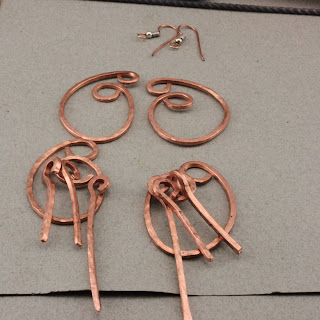 Arranging the hangers on the loops and deciding on the swing is the next to last step. After putting the straight pieces on The curved loops were adjusted so the dangles could move freely. The copper ear hooks are added and these are finished. 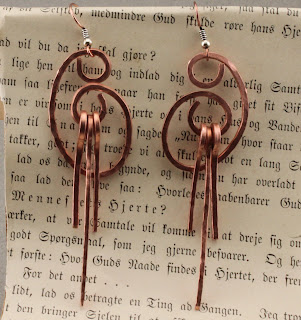 Textures are on all four sides on the long dangles and on the front and back of the short. 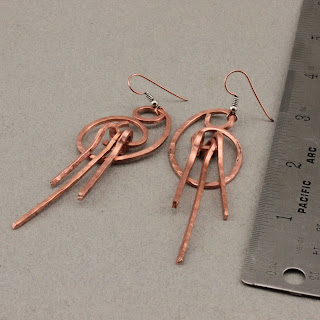 Now its time to try this in silver or gold.. You can use the looping pliers or just a wooden dowel to create these simple pieces.

Posted by Harry's Handmade Jewelry Ideas at 8:43 AM 2 comments: