Assembly of a flower ring 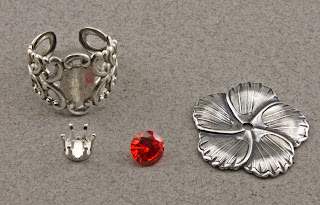 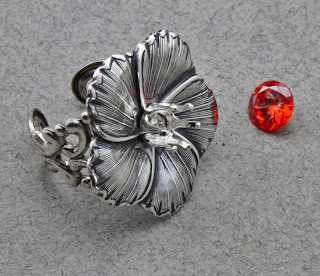 The first picture has the components I used from B'sue Boutiques we have a silverplate cigarband ring and a silverplate flower. I used my hole punch and riveter from crafted findings #1000127 to punch a hole in the ring and in the head. The head is from http://www.wiresculpture.com/ and is a sterling silver snaptite 8mm. The cz comes from them as well. The rivet was placed into the ring from the finger side and a small amount of E-6000 glue placed between it and the flower component. I placed it back into the riveter with the head over the semi tubular rivet and compressed it. The second picture shows this completed. 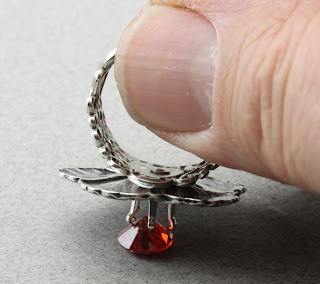 To set the stone place the head over the stone on a firm surface and press down evenly.

If you don't get it just right the result will be as circled in this photo a loose prong. To fix this you push it to the stone with a prong pusher...I use half of a spring type clothes pin...it wont hurt the stone or prong if you slip. Alternately you can grasp the prong with precision needle nose pliers and move it sideways and toward the stone. 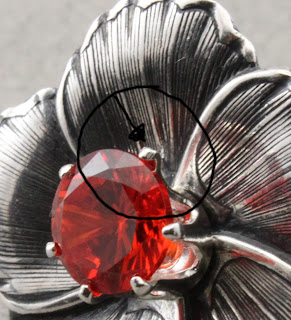 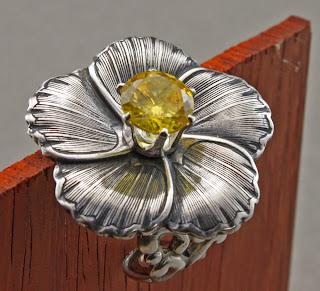 I liked the result so much I made three...a yellow sapphire,a blue tanzanite and a red cz. They will appear at http://www.oscarcrow.etsy.com/ later today. 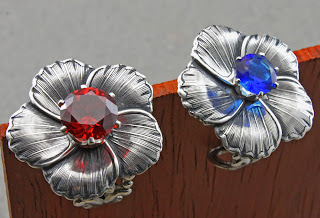 Posted by Harry's Handmade Jewelry Ideas at 9:12 AM 4 comments:

I am blogging without pictures today because my main computer went nuts this afternoon. I think the hard drive is going out. Any way what I have for today is sort of a review of a tool that is sold by Crafted findings it is a hole punch and rivet system for semi tubular rivets. It works great. When I can get pictures back I will post some of it in action. The big difference between this unit and the smaller ones from craft stores is the depth and thickness that the jaws on this unit have. I was able to punch holes in 25x18 crown mounts with 1/4 inch deep bezels. Something the little punches cant do. Also this is easy on the hands. It should be mounted in a vise so your hands are free to hold the various pieces of metal when you punch or rivet. Hopefully by tommorrow i will have photoshop on this computer and have the photos to explain this fine product.
Posted by Harry's Handmade Jewelry Ideas at 3:45 PM 1 comment: